I don’t normally find programming koans enlightening or amusing, there is one execption – which pretty much sums up my approach to vim:

But I was starting to get the feeling that most vim users had loads of plugins installed – so I decided I wanted to find out if this was true.

20 minutes later I had hacked my way through a basic survey – which was full of holes and typos. Despite this I had over 1000 responses in 24 hours – which gives us our first ‘statistic’:

So, here are the results. 1300 of you responded to the survey. Percentages have been rounded down to the nearest integer. Because I said so. Questions where the answers were freeform I’ve done my best to group. But it might not be perfect. Each question was optional so each question had a number of empty responses, I’ve left these out. This is why most percentages do not add up to 100%

I welcome others to take a look at the raw results: Link to Raw Data

Do you spend most of your time in vim or gvim?

I forgot about macvim, and had never heard of vim-qt – but thankfully most of you seemed to work out that my intention was – gui or terminal.

How often do you use vim?

The obligatory operating system question – Which do you use most?

The world is full of programmers using macs in coffee shops right?

One person said they used “your face” which is an odd choice as my face has very poor memory management.

What key do you have mapped as your leader key?

I’ve always just stuck with the default, althought I was aware that alot of people use ‘,’. Using space was new to me, but according to this it’s one of the most popular keys 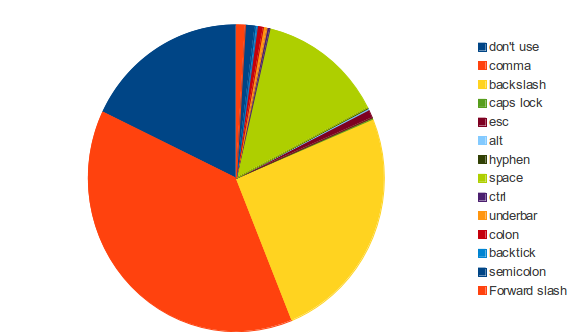 How often do you make changes to your vimrc file?

When did you first use vim?

How many plugins do you have installed at the moment?

This is the question I really wanted answered. Thankfully it seems like most of us would rather have less plugins

Do you remove plugins you no longer user?

What is your average typing speed?

Roughly how many different computers will you use in a particular week?

Have you written a plugin?

Give me a single piece of advice

Some of it is great, some is crazy, you’re welcome to take a look at the raw results:

Your view of emacs?

I spent a while trying to work out how to construct this question, what I was trying to work out is if the editor war really existed, I don’t use emacs, but I did, and there are some things I think it does better than vim, and some things it doesn’t. I spent ~2 years using emacs before moving to vim, I wanted to get a broad idea of how emacs is view by the vim community. The results were a suprise

That’s all there is nothing more. I’m not great with statistics so I encourage others to take a look at the raw data and come up with a much better ‘analysis’. If anyone feels that the above is in some way worthy of a small tip here’s my btc address: